Our mission is to unite all people with the love of God.

St. Dunstan’s is a multigenerational parish community comprising of 380 households located in the NW suburb of Houston. We see the presence of elders and children and everyone in between as a strength and gift. We strive to be a church where people find their value, their purpose, and their friendships in God’s love. St. Dunstan’s practices hospitality: the gift of welcoming others in friendship through worshiping and serving together. We offer many opportunities for everyone in the parish to join together in fellowship, ministry, and most importantly worship. We are a close-knit community faithful in our financial and service commitments, eager to share our love with others.

Rooted in Faith, Growing in Community... our core values reflect our mission to unite all people with the love of God.

St. Dunstan’s beginnings evolved from worship services conducted by The Reverend Douglas W. Hutchings for a small group of Champions area residents on the patio of one of their homes in September, 1966. As a result, on February 12, 1968, 51 Episcopalians formally petitioned The Right Rev’d J. Milton Richardson, Bishop of Texas, to establish a mission to serve the Champions area. The 119th Council of the Diocese of Texas accepted the petition and the mission was formally organized as St. Dunstan’s Episcopal Church. The Rev’d Douglas W. Hutchings was named Vicar. 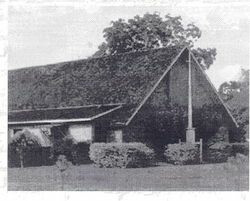 In June, 1969, 4.5 acres of land were purchased as the site for the new mission to establish permanent facilities off Stuebner Airline. An additional 3 acres immediately behind the original purchase were acquired during March, 1970. The first multi-purpose building was completed and dedicated during the fall of 1971.

St. Dunstan’s became a parish in 1972 and the Rev’d Clark Gardiner Lennard was called to be the first Rector, beginning his ministry here on July 1, 1972. The Reverend Clark Lennard was a leader, builder, and was nationally renowned for his vision and leadership in Christian Education. St. Dunstan’s grew and flourished under his guidance and direction.

An additional 1.5 acres was purchased in 1974, and the pipe organ was installed. In 1975, two temporary buildings were purchased to provide additional space for Christian Education. 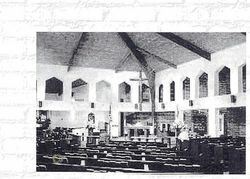 As St. Dunstan’s flourished, the dream was to have a larger nave to serve our growing ministry. A building program begun in 1979 generated almost one million dollars. In early 1980, construction began for the present nave and the remodeling of the former worship center into a Parish Hall and Education Center.The first services in the new nave were joyously held during the Christmas season 1980. The facilities were formally dedicated by the new Bishop of Texas, The Right Reverend Maurice M. Benitez on Easter Eve, 1981. An additional building, now named Lennard Hall, was constructed in 1982 and bells for the bell tower were installed shortly thereafter. Cast in Holland, the bells were named Dunstan, Richardson, Hutchings, and Lennard for the four most influential people in the life of our parish to that date. 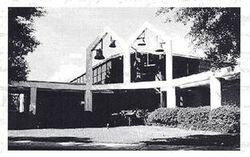 On Sunday, April 1, 1984, the congregation was saddened by the death of their rector, Reverend Clark Gardiner Lennard.

Aided by much help and support from within the Diocese, the established ministry at St. Dunstan’s continued with able assistance from The Reverend Jeremiah Ward, who was waiting to fulfill a commitment to become Rector of Camp Allen. The Reverend John R. Bentley, Jr. accepted the call to be the second rector of St. Dunstan’s and began his ministry here on December 1, 1984.

Scant space for Christian education remained a problem and another temporary building was moved onto the property to accommodate our growing group of young persons.

In 1992 more land was acquired to the south for future building and parking lot expansion. On Sunday, August 7, 1994, ground breaking for a new Education Building and parking lot took place with the Right Rev’d Claude C. Payne, Bishop Coadjutor presiding. The ensuing construction program also included the transformation of Lennard Hall into staff offices, the refurbishment of the Parish Hall building, the provision of a chapel called Canterbury Chapel off the Nave and the installation of a Columbarium. The new facilities were formally dedicated on October 18, 1995 by the Bishop of Texas, the Right Rev’d Claude C. Payne.
In January of 1998, St. Dunstan’s affiliated with the American Anglican Council. 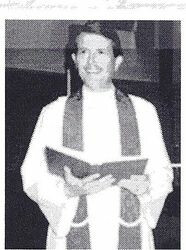 On August 1, 2004, The Rev. Nick Dyke arrived as Interim Rector and served until December, 2005. Fr. Nick helped to move the parish forward a long transition by focusing on stewardship, pastoral care, and a willingness to try new things and “have our cheese moved.” He also kept the congregation in good humor through his seemingly inexhaustible supply of Aggie jokes.

Fr. Rob Price was called from the staff of the Church of the Incarnation in Dallas to be the third Rector of the parish and began his ministry on the first Sunday of December 2005. His most immediate challenges were to: revitalize the young family and youth ministries, to meet the challenge of paying off the last of the debt on the Bentley Education Center, and to handle a significant and urgent accrual of deferred maintenance.

After two years of rapid growth and fiscal struggle, these goals were achieved. As a part of these efforts, the In His Steps stewardship ministry was brought into the parish, which continues to focus the congregation on prayer and fellowship as the cornerstones of generosity.

In 2008, following two major surprise bequests from the estates of Pat Denny and Dan Langford, the nave underwent a major renovation in which a new organ was installed, the clerestory was removed from the southeastern and northwestern walls in order to improve the sound dynamics of the room, the choir loft was expanded, icons were added around the suspended St. Dunstan’s Cross, and the sanctuary and main aisle were floored in marble. Additionally, the chapel was also renovated into a truly beautiful space for prayer with an expanded columbarium and commissioned iconography.  During this period and moving forward, staff positions were added for youth ministry, young family ministry, pastoral care, and outreach. Fr. Rob found a special niche as the “MC” of the Vacation Bible School programs, dressing in character to the delight of the children and the bemusement of the adults.

The original parish building complex, including the Parish Hall, were updated and made capable of hosting contemporary worship in 2011.  After a year of offering an experimental “5:01” service on Sunday evenings, an additional contemporary service was added on Sunday morning in 2012: the “9:01”. This service was held in the Parish Hall and ran concurrently with the 9:00 traditional service held in the nave.  In 2014, the Bentley Education Center was renovated and rededicated, with Fr. John Bentley being named the parish’s first “Rector Emeritus.” With additional music staff, the Choir Fellows program was started in 2015, bringing in top vocal performers from local high schools to offer music in the 11 a.m. Sunday Service.

The parish’s benefited from several Associate Pastors.  In 2014, Fr. Randall Trego joined the clergy team. His fruitful partnership with Fr. Rob contributed to a season of spiritual growth and deepening fellowship among the parishioners.

Two new outreach ministries helped redefined the parish as one that is fundamentally outward-looking and engaged with the needs of the community. KidsHope USA brought over a score of volunteer mentors to Eiland Elementary School, where they spend an hour a week with at-risk students. The partnership between St. Dunstan’s and Eiland has been recognized both by the Klein ISD and the Texas Education Association for its excellence as a role model for churches to follow. Additionally, the Hope Center was founded by the parish in response to discerning a clear call from the Holy Spirit to intervene in the growing and urgent challenge of homelessness along the FM 1960 corridor. The parish supplied an enthusiastic band of volunteers and the first 18 months of working capital to give the ministry its start in a strip center close to I-45. Since then, it has proudly watched the Hope Center be declared a Jubilee Ministry of The Episcopal Church and become an independent 501(c)3, involving volunteers from 17 different churches and serving over 800 guests in the first two years of its ministry.

This “peace which passeth understanding” was tested and deepened further in the midst of two distinct challenges. In the spring of 2017, the resources to sustain the 9:01 were exhausted and the service was discontinued, and its Praise Team was brought in to the nave to serve a newly blended service. Only a few months later in August, Hurricane Harvey fell upon Gulf Coast, with over 30 parish households inundated by the floodwaters of Cypress Creek. In a truly remarkable display of mutual love and sacrifice, parishioners answered the call to assist their brothers and sisters in need and mucked out houses, provided emotional support, and collected $40,000 which was distributed to affected parishioners.

Shortly after the immediate crisis of the flood passed, 40 members of the current and past Vestries of the parish met in a special session to discern the leading of the Holy Spirit in our worship schedule. Once again, God was faithful, and the leadership of the parish conversed and prayed their way to a solution that glorified God and placed loving and honoring one another’s gift as paramount values of St. Dunstan’s.  As a result, the Sunday morning worship schedule would now offer 3 services: 7:45am spoken service, 9:00am modern traditional service that blended contemporary music led by the Praise Team with traditional hymns, and 11:00am traditional service with choirs.

In August 2018, Fr. Rob announced his call to become the Dean of St. Matthew’s Cathedral in Dallas, Texas. The parish celebrated his ministry and that of his family on his last Sunday, October 14.  During this period, Fr. Randall Trego served as Locum Tenens until December 2019.

Following a 15+ month search process, St. Dunstan's was blessed to call The Reverend Dr. Roman D. Roldan from The Diocese of Louisiana where he served as the Rector at Grace Episcopal Church of West Feliciana Parish in St. Francisville.  Fr. Roman was schedule to begin his ministry March 26, 2020.  However with the COVID-19 pandemic and the shutdown of all churches in the Diocese of Texas on March 15, 2020, Fr. Roman started a week early in order to provide much needed pastoral care and guidance to the St. Dunstan's family.

St. Dunstan's continues to grow and thrive even in the midst of the pandemic.  Through the year of shutdown, St. Dunstan's was able to worship online through videos while building our a state-of-the-art livestream console.  Our small groups continued to use Zoom to stay connected and continue studying the Bible.  As move forward to re-opening and a sense of normalcy, we look forward to connecting with all those that visit us, our neighbors, those that we serve, and each other.

St. Dunstan started his profession as a monk at Glastonbury, England and became Abbot in 940. He completely reformed the monastery, and under his leadership it became famous for its learning. In 957 he was made Bishop of Worcester and in 960 was named Arch bishop of Canterbury. The King and Archbishop together planned and carried out a thorough reform of Church and State.

The restoration of monastic life, which seemed to have been virtually extinct in England by the middle of the 10th century, was almost wholly a result of Dunstan’s efforts. He established several foundations and zealously supported the cause of learning. He achieved fame as a musician, scholar, and metal worker.

More than one thousand years later, we celebrate his life, which inspires us to bring light and help to those in darkness.

O God of truth and beauty, you richly endowed your bishop Dunstan with skill in music and the working of metals, and with gifts of administration and reforming zeal: Teach us, we pray, to see in you the source of all our talents, and move us to offer them for the adornment of worship and the advancement of true religion; through Jesus Christ our Lord, who lives and reigns with you and the Holy Spirit, one God, now and for ever. Amen.